Food safety is uppermost on the minds of everyone who works for Simply Fresh Events. We know how important it is that cold foods are kept cold and hot foods are kept hot – especially as our area’s heat and humidity approaches. Here are some hints about keeping food safe as you eat this summer, whether at home, in the car, at the beach, at the pool, at the park or anywhere else you might wander during these relaxed days.

What would a picnic be without fried chicken? If you’re making it at home and taking it/serving it hot at the event, it needs to be kept at a temperature of 140 degrees. If you’re eating outdoors, be sure to eat it within two hours of making/purchasing it. If you plan to serve your chicken cold, chill it before hitting the road. Wrap it well and keep it at or below 40 degrees. 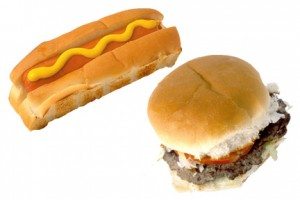 This is a tip for year-round food preparation, not just summer. Keep raw meats, poultry, fish and seafood separate from cooked food. Don’t serve those burgers on the same plate that held them en route to the grill. Don’t serve food with the sauce in which it was marinated – instead, keep a portion of the marinade separate from the raw food and serve that separate portion as the sauce for the cooked food. Keep utensils separate as well – don’t use utensils that started with raw food when you serve the cooked food.

Salads and other food made with mayonnaise

Mayonnaise itself does not cause illness. We’ll say it again: mayonnaise does not cause illness. What causes the illness is bacteria – and bacteria grows rapidly on food that’s supposed to be kept cold but is being served at room temperature. So keep that macaroni salad and cole slaw for the crab feast in the fridge until it’s serving time…and start timing as soon as you take it out. Anything that is usually refrigerated can be kept safely at room temperature a mere two hours.

Whether it’s being served hot or cold, whether it’s served inside or outside, whether it’s sitting on a buffet table or being passed from guest to guest, perishable food should not be kept out more than two hours. And if it’s 90 degrees or more where it’s being served, that time drops to one hour. Play it safe by putting that perishable food in a serving bowl, then nesting the serving bowl in a larger container of ice. As soon as the ice melts, replace it to ensure that your perishables stay comestible! And if it’s an especially hot and humid day, play it extra safe: put out half your perishables for the first two hours, then replace them with the remainder that you’ve kept in the fridge. Don’t just add the second half of the deviled eggs to that last egg already on the plate. Throw out anything that has been at room temperature more than two hours.