Want to party like the Germans without dropping some serious euros? You don’t have to travel all the way to Munich to partake in the festivities. Dust off your beer steins (ahem, krugs) pick up some choice brauts, and let the hefeweizen flow, because Oktoberfest is upon us yet again.

The original Munich Oktoberfest dates back to Oct. 12, 1810, when a party was thrown to celebrate the marriage of Crown Prince Ludwig and Princess Therese of Saxe-Hildburghausen. All of Munich’s citizens were invited and they packed Theresienwiese, or “Theresa’s Field,” for a glimpse of the royal affair. Horse races that followed the wedding celebration marked the true start of the annual tradition, and the Agricultural Show is still part of the festivities today.

These days, locals and tourists alike congregate on die Wiesn (the lawn) for the modern Oktoberfests that are quite the enduring tribute to Bavarian culture. Oh, and did we mention beer? Yeah, there’s lots of beer. One indisputable rule of Oktoberfest dictates that all the drafts served must originate from one of Munich’s six breweries — Augustiner, Hofbräu Münchner, Hacker-Pschorr, Paulaner, Löwenbräu, and Spaten-Franziskaner. By the end of the 19th century, modest booths were replaced by grand beer halls to accommodate the increasing number of patrons, musicians, and entertainment.

While shopping for your party provisions, keep an eye out for the quintessential Oktoberfest beers, which are brewed for the festival. The newer specialty Oktoberfest brews are pale ales, lending a light, balanced flavor. If you want to sample the original style traditionally served since the fest’s inception, try the märzen. It is darker and spicier in flavor, but beware of its high alcohol content. 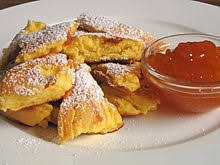 In addition to the myriad meats and salty side dishes, there are a handful of tasty German desserts to help quell sweet cravings after a day of Oktoberfest drinking. Apple strudel and plum cake will help round out your party menu. If you want to get creative, try bienenstich, a cream-filled cake with a caramelized almond topping. Another authentic Bavarian treat worth trying is Kaiserschmarrn. This sweet pancake dish is one of the region’s most renowned desserts and will be a favorite for those who love a warm finish to a hearty meal. 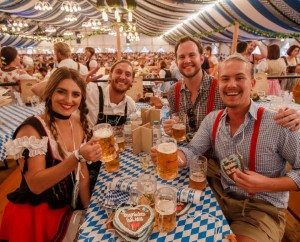 Oktoberfest is a celebration not only of culture, but also of merriment, camaraderie, and togetherness. To replicate the cozy atmosphere, simply employ benches in lieu of chairs. Much like the true German Oktoberfest, guests will get to know each other and become close friends in no time. Be sure to add some blue and white flair to decorate the table, as these are Bavaria’s colors.

Arguably one of the more fun elements of Oktoberfest is donning the traditional German attire. Yes, gentlemen, this means lederhosen! The proper dress for women is called a dirndl. If you want to get really serious, pick up a Tirolerhüte, a traditional Bavarian hat complete with a plume of goat hair. Though this apparel might be hard to come by in stores across the U.S., you can purchase these items online with ease. Plus, the Oktoberfest season falls in line with another holiday where your new costume will certainly come in handy: Halloween! 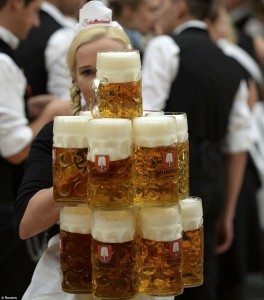 Known in America as a beer stein, the German word for this impressive goblet is “krug.” And when asking for a fresh top-off, remember to request another “mass” or liter of beer. Prior to the year 1892, the Oktoberfest krugs were all crafted from stone. Today, all krugs are made of glass and it is customary to clink your krug with your drinking companions, as you all yell “prost” (the German word for cheers!). And remember, Oktoberfest etiquette dictates that you never drink with two hands, so mind your manners. 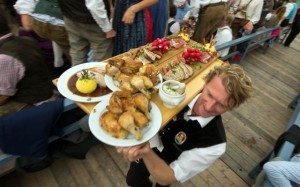 As one might suspect, the festival menu is chock-full of mouthwatering meats and the side dishes that complement them. Roast pork and rotisserie chicken pair nicely with homemade potato salad (or potato dumplings if you’re feeling ambitious). Sausages are also in high demand and include anything from bratwurst to frankfurters. Try a sweet mustard with the sausages as the Bavarians do. And of course there is bretz’n: the giant oversalted pretzels that are impossible to resist. 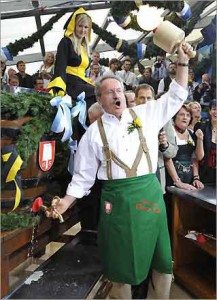 Each year in Munich the first keg is tapped by the mayor, who then declares “O`zapft is!” (“It’s tapped!”) Until this tradition is complete, no one may drink. Following the ceremony is a 12-gun salute and a colorful parade of costume groups, riflemen, musicians, and even some horses and other livestock. While it may not be possible to get a keg of the authentic Munich festival brews, a tapping ceremony can be replicated by appointing a makeshift mayor to kick off your Oktoberfest party. 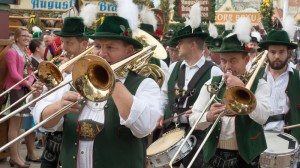 Speaking of music, more than 400 performers play at Munich’s celebration every year and this serves as a main component of the entertainment. Traditionally brass bands play “oompah” music to get people on their feet, and occasionally, on the benches and tables. While it might be a bit difficult to employ a true oompah-playing Bavarian brass band at your party, live music is a cornerstone of the Oktoberfest experience. 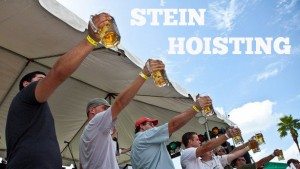 What would the world’s largest fair be without a few games and amusements? Die Wiesn is brimming with amusement rides and games for patrons, including everything from the Weissbier Carousel to rollercoasters, and even a giant Ferris wheel. Incorporate the fairground mood with carnival games and booth-style creations to get your party-goers in the spirit. 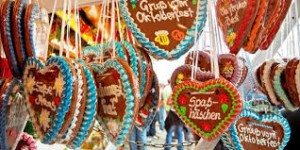 There is one thing you will see all over the place in Bavaria during the fest, and that is “Lebkuchen” hearts, or gingerbread hearts. These large iced cookies are inscribed with proclamations of love for your sweetheart, or schatz. To get the crowd involved, set up a Lebkuchen station for your guests to ice their own edible love notes. These treats double as dessert and souvenirs!